What I Read Last Month 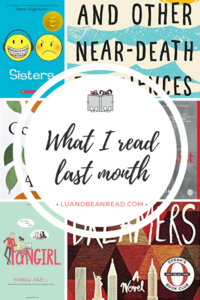 Summer truly began for us mid-June and that mean more cabin time for relaxing and reading (including longish drives listening to audio books). I have some mixed reviews to share this month. 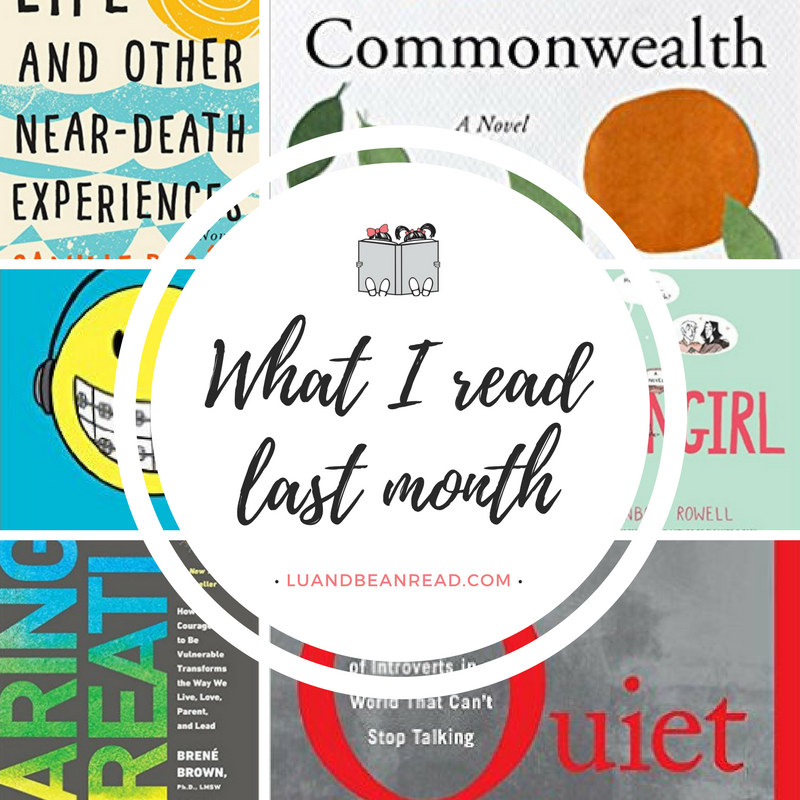 Behold the Dreamers by Imbolo Mbue

Behold the Dreamers is about the life of a Cameroonian immigrant family in New York City during the Great Recession. Jende Jonga is thrilled to get a job as the chauffer to a Lehman Bros. executive. He works happily for him, developing personal connections to his family members and getting to know a little too much about their lives. When Lehman Bros. comes crashing down, the life Jende and his wife Neni have constructed for themselves in America begins unraveling along with it. A fresh and well-written novel about the often-false promise of the American dream.

Commonwealth is a story about the joining of two families under less than ideal circumstances. When two parents leave their families to start a new one, their six children are both left behind in the mix of families and brought together as siblings. The book chronicles a decades-long series of relationships made, broken and tarnished. The families’ story is unexpectedly turned into a best-selling novel (and subsequent film), and the siblings must come to grips with feelings they’ve tried to leave behind. If you love strong character development, you will love this book.

Life and Other Near-Death Experiences by Camille Pagan

I don’t read that much chick lit anymore, so I’m not sure if Life and Other Near-Death Experiences technically qualifies. It deals with heavy topics for sure. Our protagonist Libby finds out she has what is likely terminal cancer on the same day that her husband announces he is gay. Libby makes a series of rash decisions that include selling the Chicago condo she shares with her husband, quitting her job, donating all her money to charity, and taking a long, solo vacation to Puerto Rico all while not informing anyone close to her about her illness. Things get even more outrageous from there. This is a good beach read, but it has more than one implausible plot line.

Daring Greatly: How the Courage to Be Vulnerable Transforms the Way We Live, Love, Parent and Lead by Brene Brown

I always try to read a little nonfiction to clear my mind at the beginning of the day. Brene Brown’s Daring Greatly was my pick for last month, all about the subject of vulnerability and how too often we try to evade it. Brown is a researcher, and believes being vulnerability is the pathway to what she calls wholeheartedness. To be truly courageous, she believes, we have to let ourselves be vulnerable. While I was reading the book, there were several instances where I changed my behavior, thinking, “This is what it would mean to be vulnerable right now.” I’ve also heard it has had a major life impact on others. Since I began sharing thoughts about the book, several friends have told me this book saved their lives and marriages.

Quiet: The Power of Introverts in a World that Can’t Stop Talking by Susan Cain

I technically test as an extrovert, but I think there’s something wrong with the test. I need a lot—A LOT—of alone time to restore after anything that requires interacting with others or thinking hard. Even if that thinking hard happens alone in my office. My mother-in-law recommended this book to me not only because I suppose she recognizes my introversion, but because there is a section about introverted children that perfectly describes Lu. What I appreciate most about Quiet is that it’s NOT a self-help book for introverts. It’s about why our society needs to value introverts more and design our schools, offices and even churches to value introverts as much as extroverts. It provides concrete examples of the power of introverts in organizations, and describes ways talent could be better used if we recognized there was more than one way to lead. Quiet gave me a better understanding of my own social and leadership style, and the tools to better parent my little introvert.

I’m a few years late to this party, but I snagged a cheap Kindle copy of Fangirl  one day and finally got around to reading it during my brief jury duty stint last month. I think it’s hard to read books that have been raved about for so long. The expectations are too high. I thought this would be a page-turner, but I found myself slogging through the story.  Cath, a Nebraska teenager and secretly famous fan fiction-writer moves to college. Despite barely leaving her room and suffering from some pretty serious social anxiety, Cath makes best friends with her mean-girl roommate and lands the perfect boyfriend. Oh, and finishes the fan fiction novel she’s been writing for years and wins writing prizes, etc. I wish there had been more to like in Cath (and her even meaner-girl twin sister) so I at least had someone to root for.

After finishing Sisters, I think I’ve now read all Raina Tegemeier’s graphic novels (except the Babysitters Club series, which I feel I got a pretty good sense of in the 90s). This was my least favorite among Sisters, Smile and Ghosts. Like Smile, Sisters is autobiographical and is built upon the premise that there is a major ongoing conflict between Raina and her sister. The book chronicled the family’s cross-country road trip to a family reunion, during which there were minor conflicts between family members and a major conflict (although mostly unexplored) between the parents. I didn’t observe the sisters’ conflict to be that catastrophic or even that interesting. This seemed more like a random set of memories from Raina’s life than a cohesive storyline. (Lu and Bean, for the record, think anything Raina Telgemeier writes is amazing and should be read at least weekly.)

What are you reading this month? Let us know in the comments below.