What I read last month: My August books

Summer feels so busy, but it was a great reading season for me. In fact, this has been one of my best years for reading. I’ve found lots of ways to prioritize reading in my life (including reading for 3 hours in the car yesterday to make sure I finished my book club selection in time for our meeting!). Having multiple books in my queue in different formats is one way I’m getting more reading in these days. 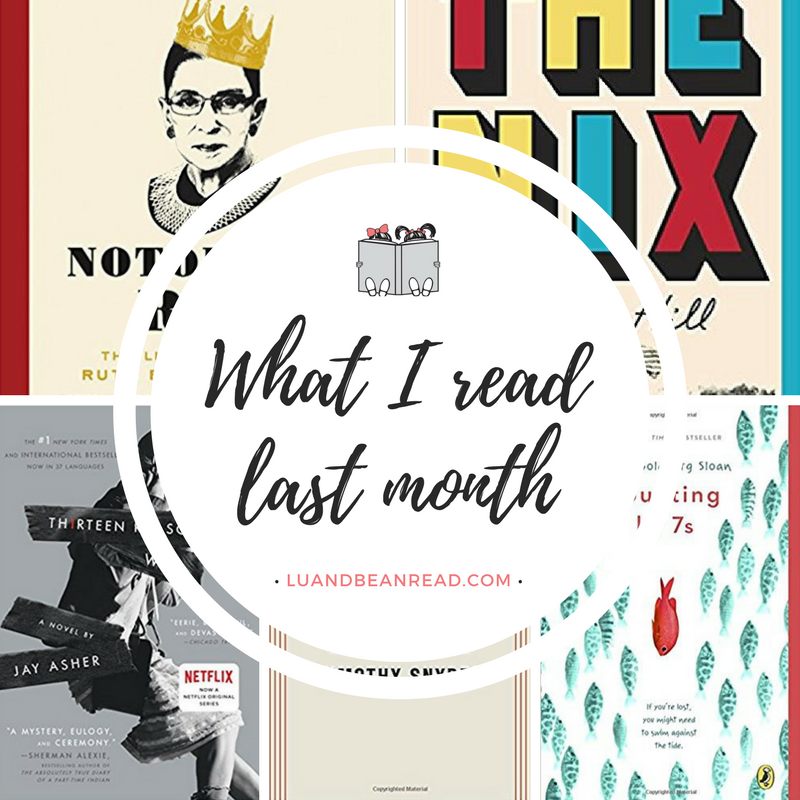 Counting by 7s is an acclaimed middle grade novel about Willow Chance, a young social outcast who is much more comfortable discussing botany or medical diagnoses than she is making friends at her new middle school. Early in her sixth grade career, the unthinkable happens—Willow’s parents are killed in a car crash. With no friends or family, Willow must create a new support system out of the few people she is connected to at school. The odd, but lovable, young girl becomes the center of a new social universe, proving that there are many different definitions of the word family.

On Tyranny: Twenty Lessons from the Twentieth Century by Timothy Sloan

I read this on recommendation from several family members. On Tyranny is written in the style of Food Rules by Michael Pollen: short, digestible lessons with practical real-life application. Each lesson is derived from failed democracies around the world over the past two decades. The book’s purpose is to identify the small ways that freedoms are taken away as governments transition to authoritarianism. It’s alarming, although it sometimes feels rushed and overly dramatic. Overall, it’s worth two hours of your time and leaves space for you to come to your own conclusions.

Thirteen Reasons Why by Jay Asher

Thirteen Reasons Why is a young adult novel about teen suicide. It has been very controversial, with some critics claiming that it glorifies teen suicide. I encourage parents to read this for themselves before handing it to your teenagers so you can have a conversation about its themes. I do not recommend this book for anyone younger than high school.

One day, Clay Jensens returns from school to find a shoebox addressed to him on his front step. He could never imagine what it contained: a series of cassette tapes dictated by his high school crush who committed suicide earlier in the month. The tapes are a sort of sinister scavenger hunt, laying out in detail the events that led Hannah to kill herself and the friends, tormenters, and even school administrators who played a role. The recipients are instructed to pass the tapes along to the next person named on the tapes until they all understand the 13 reasons she took her life.

I was fascinated by the first half of the book when Hannah described events that are sadly common for many high school students. Toward the end of the book, I thought the “reasons why” transitioned from being real and relatable to manufactured and contrived.

Notorious RGB: The Life and Times of Ruth Bader Ginsburg by Irin Carmon

Years ago, a couple of millenials started a Tumblr celebrating Ruth Bader Ginsburg as the Notorious RGB. As many blogs do these days, that Tumblr morphed into book form, with journalist Irin Carmon detailing the history of the feminist judge’s path to the United States Supreme Court and her ongoing commitment to social justice. Readers learn about Ginsburg’s family, her workout routine, and some of the decisions—and famous dissents—that have defined her career.

I was pleased to find that it’s almost a coffee table book, with a larger-than-average format and plenty of photographs and images to bring Ginsburg’s story to life. The book is organized by topic rather than presenting a chronology, which left me wishing for a more straightforward biography. And perhaps I’m too old for the format, but I found the handwritten ledger notes explaining some of Ginsburg’s opinions distracting rather than informative.

What are you reading lately? Let me know in the comments! 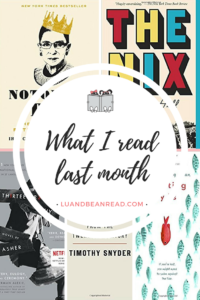