The new picture book SPIKY is the first release from Amazon Crossing Kids, a new imprint for children’s books in translation. Amazon Crossing Kids aims to increase the diversity of children’s books in translation and encourage young reading from a range of cultural perspectives. And once you read SPIKY, written and illustrated by Ilaria Guarducci, you’ll see why! The style and story are distinctly European. 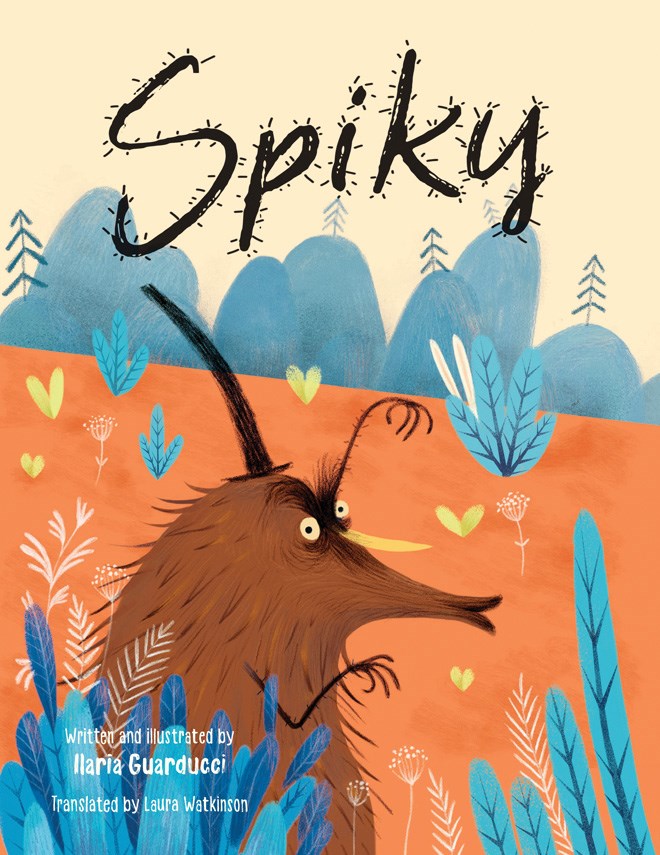 This is a unique character in the field of monsters and misfits that come across my desk in picture books. The text is also longer than what is “allowed” in most books published in the U.S. market. Not too long, mind you! But definitely longer. It’s also written in the past tense, which strikes me as different from the average PB.

SPIKY is an old grump who lives deep in forest. He is very bad, and his spikes help keep other creatures away. When he suddenly starts losing his spikes, he ends up looking, “as soft and as pink as a soft, pink marshmallow.”

SPIKY has a problem. No one is scared of him anymore! He’s not only harmless, he looks downright silly!

Luckily, SPIKY meets Bernardo the Bunny, who shows him that it’s not so bad to let yourself get close to others. Without his spikes, SPIKY can get “closer than he’d ever been before.”

When SPIKY’s spikes start growing back, he fears he’ll lose all his new friends. Bernardo teaches him that there’s more to friendship than meets the eye. Friendship goes deeper than spikes. “And it was a very, very good feeling.”

I loved having this glimpse into a fresh story from a different culture and seeing what the picture book market is like in Italy, where SPIKY was originally published. It’s definitely different from American picture books, but has universal themes and appeal for children of all backgrounds. A very good start for Amazon Crossing Kids!