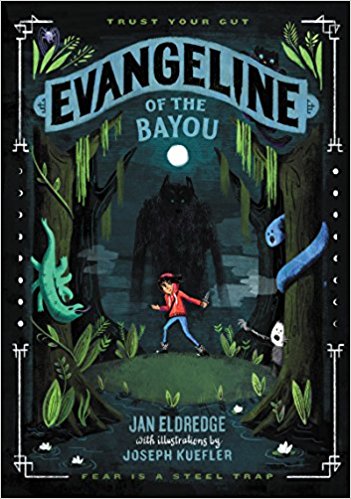 Thank you to the publisher for the free review copy of this book. All opinions are my own. This post contains affiliate links, which means that Lu and Bean Read may receive a small commission (at no additional cost to you) on products purchased through external vendors.

Evangeline of the Bayou Review

Right off the bat, EVANGELINE OF THE BAYOU will capture your imagination. The book opens with Evangeline summonsed by a messenger bird to rid her neighbor’s house of several swamp creatures. Despite the spooky setting, Evangeline keeps a calm head and gets rid of the vermin. The early swamp scenes introduces Evangeline as a Haunt Huntress in training, making several humorous errors as she works alone while her more experienced grandmother sleeps.

Just as soon as we get to know the swamp, though, Gram informs Evangeline that the pair will travel to New Orleans to help a woman who is possessed by something no doctor can cure. Evangeline is happy to leave the swamp, because she can’t shake the trail of a Grim—a canine omen of death that won’t leave her alone. She’s sure it means Gram’s days are numbered.

In New Orleans, the story heads in a different direction. Gram announces that the woman, Mrs. Midsomer, is possessed by a rougarou. In just a few days, she’ll morph into a werewolf-like creature and be lost to her family forever. Gran and Evangeline must risk their lives to stop that from happening. But does Evangeline have the power to overcome these evil forces?

EVANGELINE OF THE BAYOU is full of charm, mystery and Southern flair. Evangeline’s fearless, no-nonsense approach ensures that the sometimes-dark scenes aren’t overly scary. I especially enjoyed the early scenes in the swamp. This world was so rich that I was surprised when the plot shifted to New Orleans.

The book was full of such twists and turns. Each time I thought I knew what was happening, a plot twist would send my mind reeling. At times the plot and the inner workings of the swamp witch magic got overly complicated, to the point where I had to re-read passages. Although I predicted a few key points, much of the mystery was un-solvable until it slowly unraveled.

In the end, EVANGELINE is a unique story with a fresh voice. Parents may want to pre-read some passages of the book before giving it to younger readers, as there are references to weapons and violence throughout. 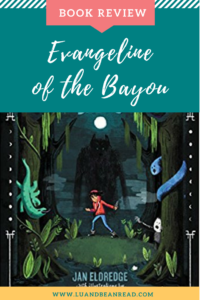