Review: Her Right Foot by Dave Eggers and Shawn Harris

We received a free copy of this book from Chronicle Books in exchange for an honest review. The opinions expressed in our Her Right Foot review are our own. This post contains affiliate links, which means that Lu and Bean Read may receive a small commission (at no additional cost to you) on products purchased through external vendors.

I am so excited to share this book with you today. Her Right Foot by Dave Eggers, with art by Shawn Harris, is part picture book, part American history lesson, part humor essay, part social justice primer, part coffee table book. That’s a lot to accomplish, which is why Her Right Foot is about three times as long as your typical picture book. 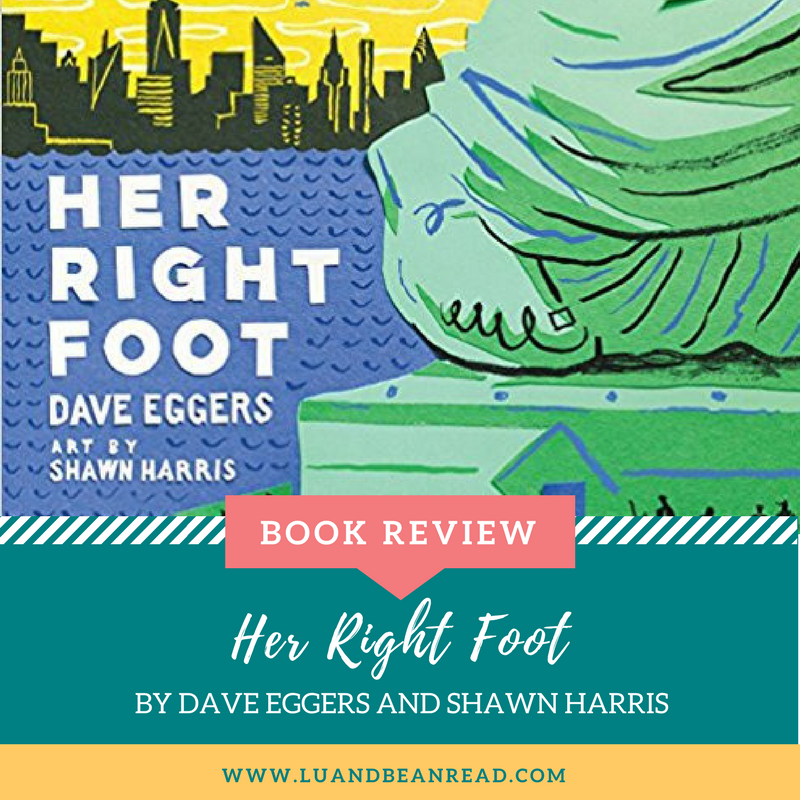 Her Right Foot starts out with a history of the Statue of Liberty. We learn that the statue was a gift from France, but we learn this in Dave Eggers’ fun, quirky style.

You have likely heard of a place called France.

You may have also heard of something called the Statue of Liberty.

Did you know that the Statue of Liberty comes from France?

This is true. This is a factual book.

This roundabout writing could have the effect of slowing the book down, but the short sentences and effective use of page turns keep the book moving forward. The humor drew me in right away. I could tell this wasn’t wouldn’t be a run-of-the-mill picture book.

The story continues in this style, sharing how the Statue of Liberty was constructed in France and subsequently moved to New York City in 214 boxes. Children might be surprised to find that the statue is a copper gold in the illustrations in the first half of the book. But Eggers explains the oxidation process, and by the middle of the book a spread shows Lady Liberty’s transition to her famous blue-green color.

So what about Her Right Foot?

By the midpoint of this book we finally get to the subject of Her Right Foot. The transition is, admittedly, a bit jarring. It’s unusual to read 50+ pages of a picture book and to have not yet reached the main point. Still, the writing is so engaging and the close-up illustrations of elements of the statue are so interesting that readers won’t mind.

What is so interesting about the Statue of Liberty’s right foot that Dave Eggers wrote an entire book about it? It’s something most of us have probably never considered. Her right foot gives the impression that the Statue of Liberty is moving. She is not a static monument, rooted in the New York harbor. Instead, she is a living ideal, always moving forward.

Eggers asks the reader to think about her right foot. What does it mean? He offers a theory:

Liberty and freedom from oppression are not things you get or grant by standing around like some kind of statue. No! These are things that require action. Courage. An unwillingness to rest.

Nothing I have read this week felt more relevant to our country than those words. As my social media feeds fill with debates about whether football players have the right to take a knee or stay in the locker room, Her Right Foot offers this simple reminder about how all progress occurs in America. By moving.

Do we stand on the sidelines, as silent observers of injustice? No! This is not the American way. We believe in liberty and freedom, and that’s why we are always shifting, always changing, always asking ourselves what is next. Her Right Foot reminds us that the Statue of Liberty welcomes the “huddled masses yearning to breathe free.” But it also challenges us to join her.

Change is part of the American experience. Like the Statue of Liberty, we must not be “content to wait.” If you agree, Her Right Foot will be an excellent addition to your child’s bookshelves.

Now if you’ll excuse me, I’m going to go put it on my coffee table. 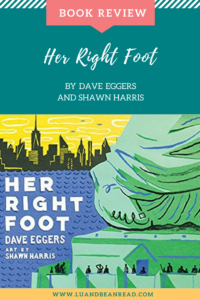